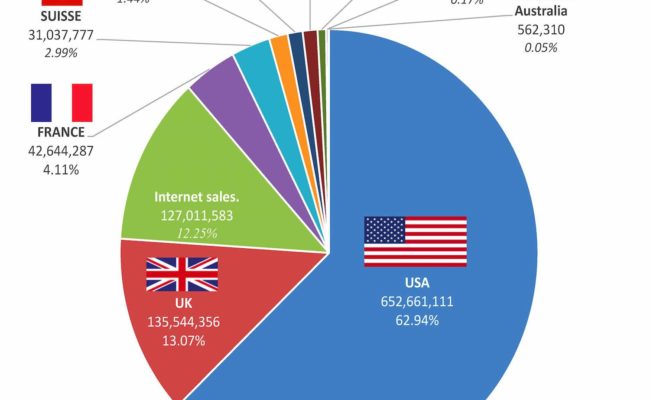 Online auction turnover tripled this past season, as recorded across 124 international auctions, yet California continues to attract the most important cars and bids with traditional August auctions

Padua, ITALY (October 21, 2021) – Italian consulting specialists Adolfo Orsi and Raffaele Gazzi are proud to release the 26th edition of the Classic Car Auction Yearbook, reporting on the September 1, 2020 through August 31, 2021 auction season. The co-authors, who have been recording, analyzing and publishing auction sales data since 1993, are launching their latest edition of the annual, hardback collector’s reference once again from the popular Auto e Moto d’Epoca Fiera in Padua, Italy today, Thursday, October 21. As every year, the launch of the new Classic Car Auction Yearbook marks the end of one season and the beginning of another and provides collectors, professionals and enthusiasts alike with the opportunity to reflect on the market as a whole with long-term perspective and easy-to-read statistics for various categories and interests.

In US Dollars, the Yearbook reports an increase of 52% in annual turnover from last year with $1.037 billion in sales and an overall sales percentage of 75%, which is 4% greater than last year and a significant indicator of market health. Though it hasn’t returned to the zenith of 2014-2015, this past season’s turnover is just a shade under what it was back in 2016-2017. And, the rocketing growth behind American sales this season, when compared to a slower Europe, reminds the authors of the significant sales discrepancy between the US and the EEC as it was back in 2012-2013.

Aside from a few spectacular auctions during the first six months of the season, revenue was down due to the pandemic despite online platforms; this said, the second half of the season rebounded with extraordinary energy and activity as people were finally able to gather again. The authors are optimistic about these positive trends, however, they do question whether or not these statistics are the result of a “technical rebound.”

In this year’s Authors’ Comment found on page 14, the general feeling of the season may be best summarized by this excerpt: “During Monterey week there were less people around, however, international interest and enthusiasm was abundant. The auction houses presented circa 50% of their cars without reserve and the overall results were better and higher than even the most optimistic of forecasts would have expected.”

Hosted at the ACI/ ACI Storico stand, the live presentation welcomes senior auction representatives from leading European auction houses who will reflect on the past season by sharing their unique perspectives and answering questions from the room.

The 26th edition of the Classic Car Auction Yearbook reports on the results from 124 auctions held from the 1st of September 2020 to the 31st of August 2021, has 400 pages with 834 photographs, 33 graphs and extensive statistical charts, and it covers 5,407 cars listed from 334 different marques with indication by chassis number and auction results in three currencies (Euro, US dollar and GB pound sterling).