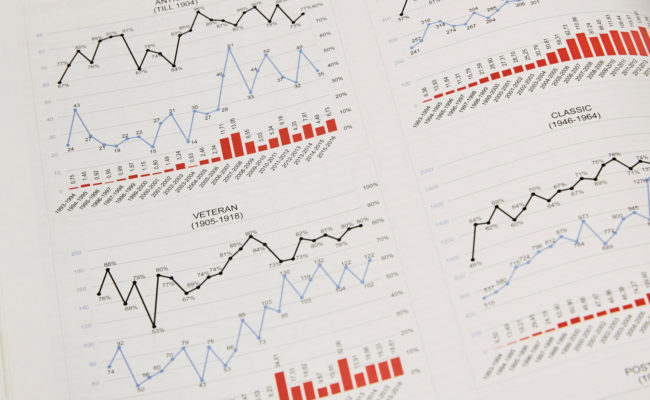 The perfect tool to analyze the trends behind 5,644 cars offered this season

Presenting fresh statistics on geographical segmentation and for period of manufacturing 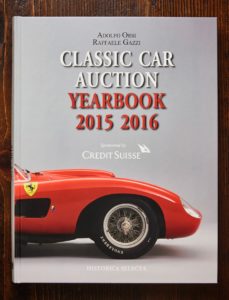 PADOVA, Italy (19 October 2016) – Historica Selecta Partners and Co-authors Adolfo Orsi Jr. and Raffaele Gazzi announce the launch of the 21st edition of the Classic Car Auction Yearbook, which they will present at a private cocktail event tomorrow evening on Thursday, October 20. This year, the Yearbook’s annual debut is officially associated with the internationally-renowned Auto e Moto d’Epoca Fiera in Padova, Italy and will take place on the grounds of the convention center.

“The numbers show a much stronger market than the impression we had in the auction rooms this year: at the end we had a total turnover of $1.2 billion, only 1.5% down from last season and, although the percentage of cars sold dropped by 6 points down to 72%, eight more cars (4,044 versus 4,036) found a new garage,” says Adolfo Orsi, historian, specialist, co-author and president of Historica Selecta.“The average value estimate of some models dropped by 15-20% but this slowdown was expected after years of increase and makes the market much healthier. We are also noticing a new generation of collectors enter the market and they tend to be focused on modern era cars.”

Once again and as part of the Yearbook’s presentation, Historica Selecta will honor Artcurial Motorcars with the second-annual Top Sale Classic Car Auction Yearbook Award for the 1957 Ferrari 335 S the auction house sold in Paris last February for €32,075,000, a record price for the season as well as an overall record for a car sold at auction in Europe. Artcurial Motorcars also took home the first-ever Top Sale Award at last year’s presentation for the 1961 Ferrari 250 GT Spyder California SWB that sold for more than €16 million at the same Retromobile auction the year before.

In support of the Yearbook debut and authors’ presentation, leading auction specialists from Artcurial Motorcars, Bonhams and RM-Sotheby’s will also engage in a lively panel discussion and market analysis for tomorrow evening’s private audience of media and insiders.

The Classic Car Auction Yearbook is an international must-have reference book and, after 23 years of the authors’ dedicated hard work, it has become an important and historical volume in libraries of savvy collectors and enthusiasts around the world. The 21st edition reports on the most important classic car auction sales from the 1st of September 2015 to the 31st of August 2016, covering 5,644 cars listed among 324 different marques with indication by chassis number and auction results in three currencies (euro, dollar and sterling). In addition to the Yearbook’s renewed and trusted reporting, the new edition offers fresh statistics and specifics on how auction sales have evolved by marque since 1993, as well as how auction sales and sale rates actually range higher when on United States soil versus Great Britain or Europe. 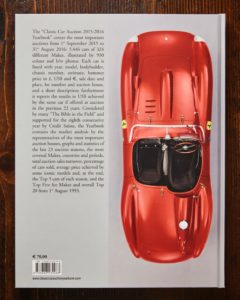 About the Classic Car Auction Yearbook

Launched in 1993, Historica Selecta’s Classic Car Auction Yearbook, sponsored by Credit Suisse since 2009, is authored and edited by company founders and historians Adolfo Orsi Jr. and Raffaele Gazzi. The new 2015-2016 Classic Car Auction Yearbook has 416 pages, 930 photographs and is available for €70 through an international network of automotive bookstores as well as internet-based retailers. For more information and to review the publisher’s directory on where to purchase the Yearbooks, please visit www.Classiccarauctionyearbook.com.

Introduced in 2004, the Credit Suisse Classic Car Program has become immensely popular. Over the past decade, Credit Suisse has built a network of friends and enthusiasts who share a passion for classic cars. Its partnership of outstanding classic events, including its own rallies and its collection of historic vehicles, underline Credit Suisse’s commitment to the classic car scene. Friends of the program include Derek Bell MBE, Jochen Mass and Alain de Cadenet. Credit Suisse also continues to support and celebrate leading historic motoring events, such as the Grand Prix de Monaco Historique and Goodwood Revival. Please visit credit-suisse.com/classiccars.

Historica Selecta was founded in Modena, Italy in 1990 by Adolfo Orsi and was soon joined by partner Raffaele Gazzi in 1991. As leading specialists in the international collector car market and champions for historical preservation, Historica Selecta often advises many of the world’s most prestigious manufacturers, museums, private events and collectors. Please visit: classiccarauctionyearbook.com/en/historica-selecta/.