With data going back 24 years, the Yearbook shows statistics on sales varying from marque to specific chassis numbers, countries of origin to countries of sale, period of manufacturing, and cars sold with and without reserve 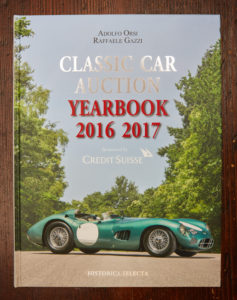 PADUA, Italy (25 October, 2016) – Co-Authors Adolfo Orsi and Raffaele Gazzi are pleased to announce the 22nd edition of the Classic Car Auction Yearbook 2016-2017, the international must-have reference book that provides a profound level of analysis on the most important automotive auction sales around the world. The co-authors, and partners of consulting firm Historica Selecta, will present the new Yearbook this Thursday, October 26th at the ACI/ ACI Storico stand inside the Auto e Moto d’Epoca Fiera. As part of the presentation, Adolfo Orsi will host a VIP panel discussion on the market with leading auction house executives – Philip Kantor of Bonhams, Augustin Sabatié-Garat of RM Sotheby’s and Matthieu Lamoure of Artcurial Motorcars – to review the past year’s sales, attitudes and trends.

“The 2016-2017 Season, which closed in August with the usual “star” auctions in Monterey, makes for a complex reading of light and shadows,” writes Adolfo Orsi, historian, specialist, co-author and president of Historica Selecta, in the Author’s Comment chapter of the new edition. “For the second season in a row, the Classic Car Auction Yearbook records a decline with $1.086 billion in total turnover from the historical high of 2014-2015, however, the total value of the market is still up +32% from 2012-2013. While the number of cars offered remained virtually the same as last year, the absolute number of cars sold has been growing constantly the past four seasons, thus signaling an expansion of the boundaries of the auction market.”

Orsi adds, “In the 2016-2017 edition of the Classic Car Auction Yearbook, we include all new statistics to better interpret the numbers, including how the increase of cars offered without reserve represents a change of auction house strategy in stimulating the market.”

An honor bestowed upon the top-selling auction house every season, Historica Selecta will present RM Sotheby’s with its Top Sale Classic Car Auction Yearbook Award in Padua, for the Aston Martin DBR1 that sold for $22,550,000 in California in August. As the authors report for the first time, the total turnover for each season is heavily weighted by the most important and valuable cars sold in August, saved for the Monterey and Pebble Beach auctions.

The 22nd edition reports on the most important classic car auction sales from the 1st of September 2016 to the 31st of August 2017, covering 5,659 cars listed among 308 different marques with indication by chassis number and auction results in three currencies (euro, US dollar and GB pound sterling). Chapters in the 2016-2017 edition are titled as follows: Market Analysis of the 2016-2017 season; Authors’ comments with 18 color graphs; Graphs of the prices achieved by cars offered and sold in earlier time (by specific chassis in three currencies); The Top 195 cars of the 2016-2017 season; Top 100 for make & country statistics; Statistics for make; Average price achieved graphs; the 2016-2017 season “TOP TEN”; The 2016-2017 season case; Auction results; 24 years of TOP FIVE; 24 years of TOP FIVE for Makes; and TOP TWENTY of the last 24 seasons. 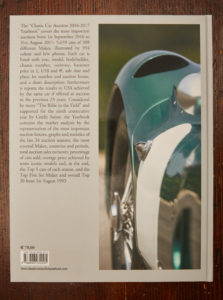 About the Credit Suisse Classic Car Program
Introduced in 2004, the Credit Suisse Classic Car Program has become immensely popular. Over the past decade, Credit Suisse has built a network of friends and enthusiasts who share a passion for classic cars. Its partnership of outstanding classic events, including its own rallies and its collection of historic vehicles, underline Credit Suisse’s commitment to the classic car scene. Friends of the program include Derek Bell MBE, Jochen Mass and Alain de Cadenet. Credit Suisse also continues to support and celebrate leading historic motoring events, such as the Grand Prix de Monaco Historique and Goodwood Revival. Please visit credit-suisse.com/classiccars.

About Historica Selecta
Historica Selecta was founded in Modena, Italy in 1990 by Adolfo Orsi and was soon joined by partner Raffaele Gazzi in 1991. As leading specialists in the international collector car market and champions for historical preservation, Historica Selecta often advises many of the world’s most prestigious manufacturers, museums and collectors. Please visit: classiccarauctionyearbook.com/en/historica-selecta/.